Natsumi Koshigaya (越谷 夏海, Koshigaya Natsumi?) is one of the main characters of Non Non Biyori series. She is the youngest of the Koshigaya siblings and the one who makes most of the ideas to have fun with everyone.

Natsumi has orange-red hair that is messy in a half up half down do, blue-grey eyes and she wears clothes that are quite boyish and easy to run in.

Natsumi is a fun-loving girl who makes most of the fun ideas for everyone and she tried to get out of trouble or responsibility by blaming it on others (even objects) and hiding proof of bad things she did. She is very energetic as she can't sit still for long, often fidgeting in her chair. She often teased Komari Koshigaya (Natsumi's older sister) and Yukiko Koshigaya (Natsumi's mother) disapproves of her grades or messes. Out of the three older girls, Natsumi seems to be the one who gets along the best with Renge Miyauchi, often taking her questions seriously and sometimes calling the other characters by Renge's nicknames for them.

Despite hating school, she shows a lot of knowledge in nature (plants, animals etc.) and practical country activities. 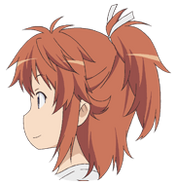 Another Pose of Nattsun
Add a photo to this gallery 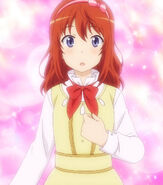