Kaede Kagayama (加賀山 楓, Kagayama Kaede?) is one of the characters of Non Non Biyori series. She runs a candy store, but she also rents ski equipment, futons and make mail deliveries.

Kaede is usually kind and friendly and has a soft side for Renge Miyauchi, although due to budget problems she can be desperate over earning money. When she was still in the branch school, she often took care of Renge when she was a baby, and the two seem to still hold a close relationship, as Renge wears bows in her hair the same way Kaede used to do when she was younger.

Kaede is a young woman with little direction in life. After finishing her studies, she inherits her grandmother's candy shop in the farming village she grew up in. Her business is not very profitable, her only customers are four girls that attend the only school in the village. The youngest, a precocious first grader named Renge Miyauchi Renge, is her most frequent guest. We learn that Kaede, while in high school, reluctantly would care for baby Renge in place of her feckless onee-chan, Hikage Miyauchi. She is not good with kids and did not enjoy being around them. Renge was more than a handful, yet Kaede managed and began to become affectionate towards her.

As the years went by, Kaede grew up living only for herself. Now as the proprietor of a small store, she spends most of her time alone and struggling with poverty. Renge, older and beginning to explore the world around her, never forgot the compassion she received from Kaede. She often goes to see Kaede to tell her about new discoveries or share her enthusiasm for life. Though normally detached from others, Kaede takes a renewed interest in the little sprite. While Renge grows and has new experiences, Kaede watches closely over her. The curious young girl gives Kaede purpose in her dreary life. As Kaede's love for Renge nurtures, she finds a warmer side of herself she had not known before. 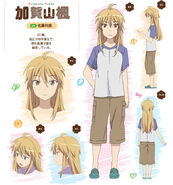 Add a photo to this gallery
Retrieved from "https://nonnontv.fandom.com/wiki/Kaede_Kagayama?oldid=7358"
Community content is available under CC-BY-SA unless otherwise noted.